How is born a work of art? It’s just creativity or, rather, it’s the result of a careful study combining inspiration, technique and research, flowing after into the concrete practice? A real “gestation”, like the one that tells Marco Gallotta, Italian artist who moved to New York: he realized the portrait of Will Smith published on our cover: it is the result of many meetings, insights and moments of debate between the actor and the author of extraordinary paper cuts.

New York is a great source of inspiration for my art. New York is the ideal platform for artistic expression worldwide, a rare place where the creativity of the vast cultural movements converges, creating synergies but also stimulating unique individual paths. New York is incredible, and being an artist in this city means getting ultra satisfying opportunities such as when I was asked recently to create a piece for actor Will Smith.

The first time I met Will Smith was in 2007 during the filming of the movie “I am Legend”. During one of the breaks, a member of his staff introduced me to the actor saying that I was an Italian artist living in New York. His first words were, «I love Italy», and then he continued by saying «I’ll remember to look at your work, in fact I’ll call you “Renaissance man”, so I won’t forget for sure». A few months later, I was invited to the premiere of “I am Legend”, where I had the opportunity to see him. On that occasion, the actor told me he had seen my work and that one day he and I would have had to discuss art. After eight years and numerous meetings, I created a special piece for him. In 2015, on a freezing January day, I was invited on the set of one of his most recent productions to present him with a portrait. Six months earlier I had received a call from a member of his staff. The actor was facing a very challenging role and the character he played required intense concentration. Will Smith, I was told, needed to surround himself with “beautiful things” to relieve the pressure that he was under while shooting. To that end, I was given the task of enriching the walls of his apartment and even his trailer on the set of the film with ten works, personally selected by the actor.

Fascinated by the technique

Paper cutting is the art of cutting paper. My technique is the result of continuous research and experimentation. Since the beginning of my career, my subjects were the result of the interaction between physical and geometrical shapes. Faces, bodies and objects were created using geometric shapes, such as circles, triangles and rectangles. The rigid shapes later became irregular and organic, enriched with soft curves alternating with sharp angles. From there, I developed the idea of breaking down these complex subjects with carvings. I let myself be guided by everything around me, and I shape the human and natural material with a great sense of imagination. I work mainly with photos that I carve with a scalpel with surgical precision. The result is a series of overlapping images, to which I sometimes add layers of color and wax to create uneven and interesting surfaces. Will Smith, surrounded by my art, was quickly fascinated by it. The actor felt that the various layers in my work had a very different meaning than a mere aesthetic purposes. My subjects hide the extraordinary and my meticulous cuts and overlapping images are a metaphor for the fragmented nature of truth and its evolution.

In “Siddhartha”, Herman Hesse describes the character as a man who tries to live his entire life through reasoning and the attempt to understand the deeper reality of things. Similarly to Siddhartha, I am also looking for the “whole” through my art. When I was asked to create a portrait of Will Smith, immediately my goal was to create a work that forced the viewer to linger and study its meticulous details. Over the years I got to know Will Smith and appreciate his talents. In addition to being an extraordinary actor, careful and methodical at work, he is also an extremely nice person. In my piece, Will Smith is deconstructed. The portrait becomes a window through which we explore the emotions of the subject. From the details of the work emerges the essence that defines reality, which is open to various interpretations and constantly evolving. In my work I express the desire to pay homage to the actor and put him once more, and in a different way, in connection with the audience.

When I finally delivered the work to Will Smith, his expression was one of those that will remain forever etched in my memory. He admired his portrait, keeping it in his arms, without speaking. From his look and his smile I knew I managed to grasp his essence in my work and we were both very happy about it. The artwork is now in his studio in Los Angeles. 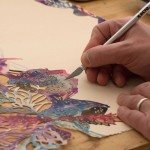 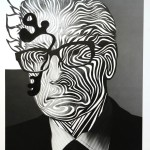 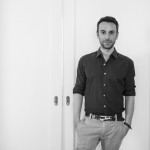 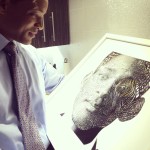 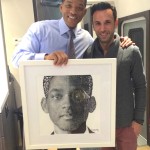 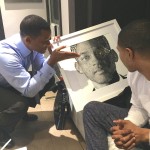