Over 20 million euro investment over two years to support Italian exports of textiles, clothing and accessories in the United States. It is the special fashion US Plan, the Deputy Minister of Economic Development, Carlo Calenda, presented in New York accompanied by senior Agency Ice, by a delegation of Confindustria and of the main associations of the sector. «The plan aims to bring Italian products of great quality but not too large enterprises in contact with the American department stores, which usually cover the whole country – said Calenda ANSA – which can give the opportunity to access a market that today is only touched by our export. The company, once it comes, will demonstrate the ability to serve a department store in the US, and this is not a simple thing», added the deputy minister. The special plan, along with the Food one presented in Chicago in June, and the project of attracting investments, is the tool carrier of the project for the international promotion of the government that looks to America as the main market. In 2014, exports of the fashion sector (textiles, clothing, footwear, leather, leather goods, cosmetics, eyewear and jewelery) for Italy in the United States, reached 5.2 billion euro, an increase of more than 11% over the previous year. The launch took place in conjunction of three events that see Italy protagonist: Milano Unica New York, the famous fair of Italian textile-accessory for the first time in the US, the show menswear MRKet with the Italian Pavilion and New Lineapelle York, first American edition of the event dedicated to leather. And to end the day was dancing with the ballet “The cloak of the dragon”, held at Lincoln Center by Lineapelle, Milano Unica and Ice Agency, where the protagonist was the first dancer of the Teatro alla Scala in Milan, Sabrina Brazzo. «As Italy we crossed a difficult period of recession, but now we are back, and our country is a great opportunity for foreign investors», said Deputy Minister Calenda. «We are enhancing and strengthening the activities in support of Italian exports, and you can already see the first results with a +35% in the first five months of 2015 compared to the same period of 2014», annotated instead the General Manager of ICE Roberto Luongo, this together with the President Riccardo Monti and Director of New York, Maurizio Forte, who said: «In these three events we had over 200 companies and trade associations of the most important sectors of textile, clothing, footwear , jewelery and leather goods – added Forte -. It is a very strong signal, when Italy moves together in a structured way is a great power and it also shows the reality of the facts».

The Special Fashion Plan forecasts a budget of 20 million Euro for the 2015-2016 period, to be implemented in four separate segments: agreements with the most prestigious U.S. fashion retailers; promotional fairs and events; incoming services in Italy; media promotional campaigns. The U.S. is the largest consumer market in the world and has a significant youth culture. Of a population of 315 million, 34% are under 25. 2014 saw substantial gains in Italian Fashion goods exports (Textiles, Clothing, Footwear, Hides and Leather Goods, Cosmetics, Eyewear, Jewelry): Italian exports to the U.S. totaled 5.2 billion Euro, representing an 11% uptick compared to the previous year. Italy is the third largest exporter to the U.S., after China and Vietnam, and its 4.5% market share growth since 2013 demonstrates a growing bias toward quality goods. Thanks to increased spending power due to the dollar’s advance on the euro, the first four months of 2015 saw even more positive data with a 23.3% growth rate compared to the same period of 2014. Further details demonstrate a 7.36% increase in menswear exports compared to 2013, an exchange value of 477 million Euro. Textiles registered a 15% increase compared to 2013, with an exchange value of 318.5 million Euro. The hides market saw a 13% increase compared to 2013, with an exchange value of 156 million Euro, and an extraordinary 40% jump in the first four months compared to the same period of 2014. From 19 to 22 July 2015, New York, ever the Fashion capital of America, hosted a linked series of events and fairs highlighting Italy. Milano Unica New York: The celebrated Italian textiles and accessories fair launches for the first time on American soil. After winning over Shanghai, where Milano Unica has successfully presented the best of Made In Italy for 8 years, the first edition of Milano Unica New York exhibited 85 Italian companies, held at the Javitz Center, July 20-22, 2015. Padiglione Italiano at the MRKet Show: dedicated to menswear, it presented 56 Italian companies, Javits Center, July 19-21, 2015. Lineapelle New York: The first American edition of the Italian leathers fair, presenting 50 Italian companies, at the Metropolitan Pavilion, July 21-22, 2015. “The Cloak of the Dragon”: a ballet produced by Lineapelle, Milano Unica and ICE, held at Alice Tully Hall, Lincoln Center, July 20, 2015. La Scala’s Prima Ballerina, Sabrina Brazzo, leaded a prestigious corps du ballet. An audience of 700 is expected. The costumes were created with the leathers and textiles furnished by Italy’s finest producers. Indeed, these New York events offer a great opportunity to present, for the first time in the U.S., The “Segno Distintivo” of the goods produced in the Italian fashion sector and The Extraordinary Italian Style that will further highlight the “Sistema Italia” at future Italian shows. This unique approach to the promotion of Italian exports is sponsored and produced by the Italian Ministry of Economic Development and the Italian Trade Agency ICE. In addition to the abovementioned activities, the Italian Government, along with Confindustria and Industry associations, is promoting the following series of events in the United States: Cosmoprof North America, Las Vegas (cosmetics); FN Platform, Las Vegas (footwear); JFK Las Vegas (jewelry); Fashion Coterie, New York (womenswear); Vision Expo, New York (eyewear). 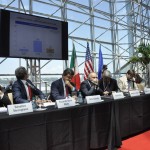 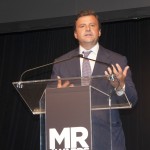 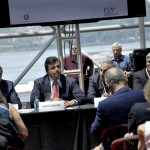 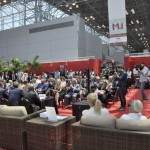