Bread is something that should never miss on a table. Accompanied by an other very important ingredient in the mediterrean cuisine, that is very appreciate in USA, olive oil. My bread is made with sourdough and have different kind of flours – white, whole wheat and rye flour. It’s a very fragrant bread that remember NY bakeries and their products. It is a bridge… between America and Europe. 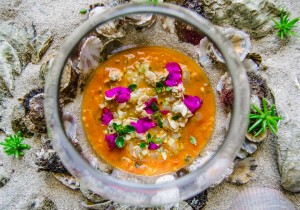 The idea was born on the way. Remake the soup, in the NY version, trying to enhance the flavors, cooking the ingredients separetely. I prepared that in tree steps: First I cooked the sauce with herbs and spices, then I made a brunoise of potatoes and celery, I blanched them and I put them aside, just ready to add in the soup at the end. In the last step I opened the clams very quickly for don’t lose the juices. The final result is a soup that have the original feature but at the same time exalts all the ingredients. It is a rich dish, very tasty. In this case I preferred to work on the technique. The results is fragrant, fresh and with summer colors. 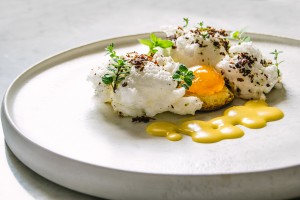 First time I tasted egg benedict, was in NY,sitting on the table of WD50 of Wilye Dufresne. It was his egg benedict. It was clear that the dish had behind a lot of hours of studies. Just because it was very well created and also extremely good. Then I just thought to make my version of this dish – very important in the tradition of USA. My dish has the egg divided in 2 part, the egg yolk is marinated and egg white whipped and cooked. Bacon is dehydrated, pulverized and mixed with coffee. The result is a toasted and aromatic flavour to which is added hollandaise sauce. Egg give you the possibility to make experiments with its considerable versatility, give you the possibility to use different tecnique as few ingredients can do. 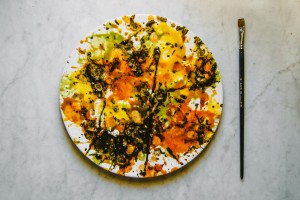 Long Island is a fantastic place, very close to NYC. I put it in the menu because it gaves the natives to a lot of artists among others J. Pollock and Lou Reed. This dish is a tribute to the great american painter, a tribute to all of the neyyorker artists and to the neighborhoods where they live. I tried to remember Pollock using diffent ingredients, like tomatoes, red and green peppers, lettuce, cucumber making them similar to colors for painting that are mixed in a plate as a picture. 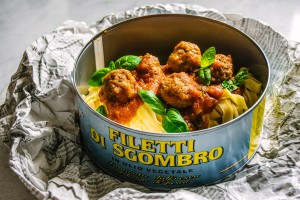 It might seems the simplest dish, but I think this icon of the italianamerican gastronomy it’s much more than just folklore. This dish is the essence of familiar meal, the memory of far lands. A tribute for the knowledge and manuality of the migrants. Gesture, like break the eggs in the flour… stir the tomato sauce with its flavour of fresh basil. The meatballs, fried, hot, as the grandma made it. This is not a studied and revisited dish, it’s a simple dish. It’s a dish that binds who make it and who eat it. It’s a challenge dish, a challenge against the bad copies that I ate in NYC, where the sauce was too sweet or to savour, the meatballs insipid or the pasta overcooked. 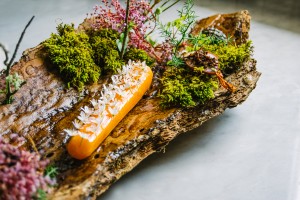 Hot dog in Central Park is a mock hot dog. The idea came up for give an homage to the farmers market and the rooftop gardens in NYC. I was really impressed about them. So I recreate Central park in a bark of pine putting a slow cooked carrot instead a real hot dog. Carrot has a stuffing inside made with all of the ingredients that you can find in a hot dog, so mustard, cucumber, onion and of course the bread. It’s a dish that have a value also if you think from the nutritional point of view. A light remake of all the meat and fat that you can see in the fast food. 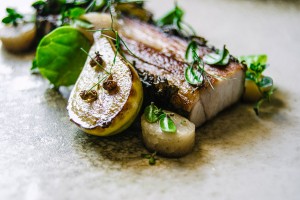 This dish born in the Queens fish market. 5 o’clock in the morning… I was alredy at the market, a few hours after landing in NYC. Track loading and unloading fish, bystanders shouting and the nice smell of the sea all around. Inside the market there was a bar, where two guys was making breakfast, eggs, bacon, burgers, coffee. I didn’t eat a real burger yet so I ordered one excited for the nice flavours in the bar. I will never forget the first bite. The meat, very tasty, with a flavour of iron, with a aftertaste of pork and liver. Weird. Generally the burger taste of beef. It wasn’t the best burger I ate in NYC, but perhaps, it’s this the reason because it is still in my mind. I tried to reinterpret this experience on the “Meat&Fish”, pork belly and smoked herring. The taste it’s really close to the burger that I ate at dawn of the first day in New York. 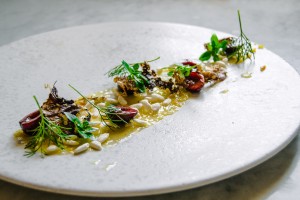 This another tribute… For Lou Reed and his album “New York”. The dish is inspired to the song Xmas in February… The private Orange is represented by the orange marmelade, while the Vietnam War is remembered with the bloody red of the cherries. Southeast Asia resurfaces with the puffed rice and the thai basil, and also for the cherries that remeber also a sacral tree in a country of Asia, Japan. It is a dish that remember all of the asian migrants in NYC and their cultural influences. 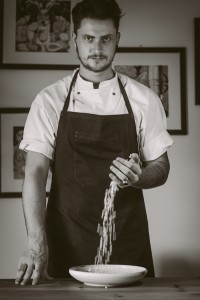 Born in Palermo in 1990 from a family of restaurateurs, I begin to develop a passion for cooking since the age of six years when I start to wander through the kitchens of family restaurants. The passion grows and during summer breaks from high school I dedicate my time to learn the art of cooking from my parents and uncles restaurateurs too, in Germany. After high school I decided to enroll at the University of Gastronomic Sciences in Pollenzo. A choice that will change my life radically, immersing myself in the world of food and allowing me to travel around the world to explore the traditions and cultures of different countries. Significant experience in Mexico,United States and almost all Europe. Continuing to work in restaurants in the Cuneo area, where the university is located, take the opportunity to launch into a new adventure in Spain, where I worked under the great guide of Sergi de Meja before and Oriol Rovira later on: Two catalans chefs that teach me a lot and that allow me to grow exponentially before moving in the Danish capital Copenhagen where I stay 2 ½ years, working in under other big chefs as Francis Cardenau, Christian havens and Torsten Vildgaard, al that improve me even more. There deepen the largest Nordic cuisine launched by Noma before returning to Palermo after 6 intense years, to work as a assistant head chef on the Michelin star restaurant ByeByeBlues moving later on to the Cuveè du Jour at the Grand Hotel Villa Igiea still where I am.
In January I will move to San Francisco for a double experience, Benu and Coi, restaurants, these world-class that I hope will give me an extra boost to get to my dream to have my own restaurant where I could finally express 100%.