Did you know that the founding father of Nutella was Napoleon Bonaparte? In 1806, in Berlin, Napoleon Bonaparte issued a decree that put a total embargo on the British Isles which stopped ships bringing cocoa from the America’s to Europe. In Italy, the chocolate makers of Turin, capital of chocolate in Europe at the time, were thus unable to find the raw material. So they used a surrogate, with the local hazelnuts from the Langhe area in the hills in the south of Piedmont. Thus the giandujotto was born in 1865; the ancestor number one of Nutella: they were able to create a new chocolate from cocoa and hazelnuts which invaded the entire world. Then there’s another stage in the history. In 1945 the Italian confectioner Pietro Ferrrero from Alba, in the Langhe hills, invented a solid block of chocolate with hazelnuts – the “Giandujot” – to be cut with a knife and wrapped in aluminium foil. It was a sweet product that was accesssible to everyone in the difficult post Second World War. This was the second ancestor of Nutella. The third was the Supercrema, in 1949: a new kind of product was born: spreading creams for breakfast. My book Nutella World tells the story from the origins. Why I wrote a book about this lovebrand? I’m an independent food writer and a journalist with 30 years experience as a political reporter for the italian newspaper La Stampa. I have also published about 20 book -a lot of with my wife Clara – on food culture and history. I was born in Alba, in Northern Italy, famous for his wines, truffles and… chocolate. When I was a kid, I was surrounded by the smells of wonderful food like mushrooms, fresh pasta, coffee and, of course, roasting hazelnuts and cocoa. Because Alba, my hometown, is where Nutella – to pronounce new-tella, not “natella” – was created in 1964. The book is divided into four parts. The first one is about how Nutella became an iconic brand, a lovemark. The second one is about with the advertising compaigns of Nutella in the media, from tv to the web. The third part deals with the Ferrero company development and philosophy. And finally, the fourth part deals with the 50 year anniversary of Nutella celebrated in 2014 all over the world. The Ferrero company has a family-based culture emblematic of Italian entrepreneurship: I’m proud to tell this history my book, that now it will be translated also in China, Poland, Netherlands, South Corea. An example of “Made in Italy” style. 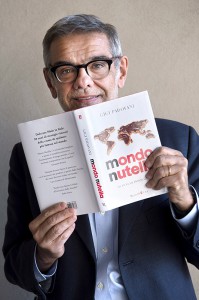 Gigi Padovani was born in Alba in 1953, and had been working as a reporter for La Stampa for many years, writing articles on domestic politics and society as well as collaborating with other newspapers and magazines. An essayist and food writer, he has published about twenty books, some of which have been translated into other languages. His publications include: Nutella: Un mito Italiano (2004), Slow Food Revolution: A New Culture for Dining and Living (2006), and Street food all’Italiana with his wife Clara Vada Padovani (2013).